Advantage won the prestigious Insurance Company of the Year award at the Manchester Business Awards on Thursday 29th November. Advantage Home Construction Insurance (AHCI), which is one of the nation’s leading specialists in latent defects insurance, was named as the winner in their category during an awards ceremony at the Midland Hotel, which was attended by more than 300 North West business leaders.

The win comes at the end of an exciting year for the business (which has its headquarters in Warrington) during which Advantage has opened a new office in the South East and added six new members of staff to their technical team. They’ve also recruited non-technical staff and have taken on a raft of new instructions. In the summer, Advantage signed a 2,500 apartment deal with the Elliot Group to source structural defects warranties for residential developments in Liverpool, Manchester and Leeds and they frequently work alongside developers on large-scale projects, covering both commercial and residential properties ranging in scale from individual properties to developments with a build cost of over £50 million.

Downtown In Business has been hosting the Manchester Business Awards for eight years and this has become one of the most eagerly anticipated awards evenings of the year in our region. James Topping, Advantage’s Regional Manager, took to the stage to accept the award on behalf of the Advantage team. He said:

“We are delighted to receive this award which caps an exciting year of growth for the company, it’s been a real team effort and we are looking to build on this success in 2019”.

The awards were hosted by BBC presenter Jacey Normand and Downtown’s Political Editor, Jim Hancock, and were sponsored by Totaljobs.com, and during the course of the evening, the hashtag for the event #COMBA18 trended nationwide.

John Duncan of Virgin Media Business, the sponsor of the Insurance Company of the Year category, said: ­­­­­­­

“­We were delighted to be sponsors of this award at the fantastic Downtown In Business COMBA 18 awards, and see such a worthy winner in Advantage; congratulations to all the team.”

“(At the awards) we celebrated the leading businesses that have made a significant contribution to the economic growth of the city.

“It is wonderful to see the continued success stories from the region and the see how the business community continues to grow and make Manchester such a vibrant and dynamic city.”

Want to learn more? Contact one of our relationship managers today to discuss your requirements on 0845 900 3969 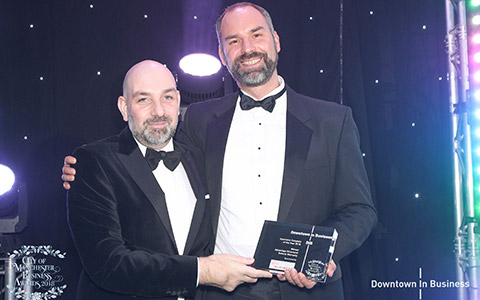 Advantage accepting Insurance Company of the Year award at the Manchester Business Awards.

If you'd like to learn more about our Structural Defects Warranty services or don’t want to miss a press release, a new trend or an exclusive, then subscribe now to our marketing communications for regular industry updates.

If you'd like to learn more about our Structural Defects Warranty services or don’t want to miss a press release, a new trend or an exclusive, then subscribe now to our marketing communications for regular industry updates.